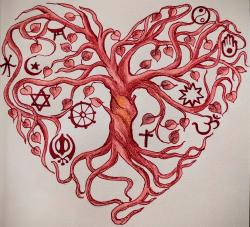 SEED QUESTIONS FOR REFLECTION: How do you relate to the notion of truly accepting a path different from your own as valid and worthy of respect? Can you share a personal story of a time you were able to go beyond tolerance and toward deep respect for world traditions that were quite different from yours? What helps you develop the ability to respect the world's diverse traditions and eschew a sense of superiority of your own tradition?

If I may assume that God means same qualities in every religion/belief then for the sake of understanding, let's call God=Principle. Principles are natural laws that are universal, self-evident, self-validating, timeless, objective and at work whether or not we understand or value them. For example the Law of Gravity.
If another assumption I make is true then every religion/belief is a mental map of that community. Lets call it Paradigm.
As long as Paradigms are in alignment with the principle there should not be any conflict. Just the Peace everywhere.
Learning lesson for me is that before I act on any of my thought(Paradigm), I should confirm that its in alignment with the Principle(GOD). If not then don't act on it because acting on a thought that is not aligned to the Principle is for sure going to bring conflict.

Life, as a hopeful journey, is a series of events. While the path is unknown and ismanifest daily, the vision remains: all souls get to heaven. How wonderful the myriad ways...

Dear all,
As a hindu, religious tolerance is ingrained into my system and as a Heartfulness practitioner I have been following this since 1997 December.
The change should come from within, when I learn to accept all as my brethren irrespective of their religion and myself raise above religious diversification can I truly be a Human.

I grew up in a Christian home and throughout my adult life have tried on different faiths within Christianity. It wasn't til I step back from traditional, institutionalChristianity and opened my mind and my awareness to study Hindu, Muslin, Kabbalah ( mystical Judaism) that I saw Christianity in a new light. I incorporate many beautiful prayers and practices from each of these religions which has made for me now a very rich, moving, and spiritual life.

When we consider entire universe, we really belongs to minorities. And I think we got special status too. We got brain and we can really make big difference.
I always heard and I believe God is one. All religions are just a way to reach out to God. You call him by any name but end of the day we all are waiting for miracle. There is no good or perfect way.
Everyone is trying but some people find him within, some find in nature, some find in the smiles that they bought on other person face and some are still running behind to find him.
Truth is, journey is endless until we will start believing in humanity and kindness. No one has seen God but his presence is everywhere. I can feel his presence right now in this moment:)

In the eyes of God, all are equal -- there are no superiority or minorities.

I love the question of the man asking what he is doing there, if God isn't partial - and imagine to being able to hold that space for him to find his own answer, by saying: I don't know. I love that you are asking that question of yourself.
So often we think we need to find answers to convince others of the truth and the light we've seen. And they can never find it on us, only in themselves, listening into the silence of their own wisdom.

Everyone as a minority has a wider opportunity to evolve, instead of getting stagnated.
Further being a minority (call it singularity),facilitates getting connected (by peeping inward) to the core of existence and realize its everlasting beauty.

Wow! This spoke straight to my heart! For years I have met many beautiful souls whose beliefs are different from my own and intuitively felt like there was "something wrong" with what my religion was teaching me! More recently I have had the privilege of working with others that have no religion and I have found their souls to be quite vulnerable and almost childlike. We are all inherently good and beautiful in the eyes of God. May I see with God eyes always! â˜ºï¸ðŸ™ðŸ»

Wow. What a profound , hard hitting statement on religion. Apart from respecting other religions , it also shows us the path of true worship, which is without fear or reward and just in the spirit of service or unconditional love.
Am reminded of a mystic baba who had founded a big temple and almost a sect , in Delhi, whom i used to meet very regularly , sharing this with me. " Most of the people coming over here ( mostly rich and powerful), come here , either by fear or for reward . They look at the temple visit , either as a means to avoiid hardship or pain or a fulfillment of their wishes or some desire. I still welcome them, with a hope that some day they would see the futility of thier prayers and actually start worshipping just for the sake of worshipping/service or just ib the spirit of service with unconditional love for god and all humanity.

Pluralism is reality. Erecting walls to shut out and separate is fighting reality. I accept being open to, learning about, and understanding a path different from my own, and accepting it if it is pro growth and not hurting anyone. I've learned a good deal about paths or traditions other than my own, such as about Buddhism and Hinduism, and am way beyond tolerance and into deep respect for those traditions. They actually make more sense to me than my own tradition. What helps me develop ability to respect the world's diverse traditions and eschew a sense of superiority of my own tradition is for me to not just listen to what I or others think, assume, or judge about other traditions, but for me to be open to learn about the other traditions and be open to the truth in them.

Tolerance is different from respect. In tolerance, we consider ourselveshigher or better than others. In respect we view and relate to others as equal. As I was growing up I have had manyexperiences of relating to people of different faiths in different contexts. My father was a Kirtankar- chanting the Songs of Rama and Krishna. My brother accompaniedhim by playing a harmonium and a Muslim gentleman playing tablas-Indian drums. I will never forget how ecstatic and happy we were transcending man -made dividing boundaries. I had similar experiences when as a child I was in the presence of Mahatma Gandhi in Gandhi Ashram in Ahmedabad. Such unforgettable experiences have shaped my outlook and behaviors towards people of different faiths.

I have learned to be mindful and aware of any thought, sense or feeling arising in my mind about superiority of my spiritual or cultural tradition. Such mindful introspection is very helpful to me to work on my own self.