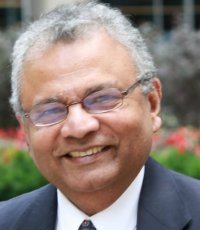 “The seeds of peace come from the ground.”

“You don’t begin by going to library. Theology begins on the street. Go to understand what Scripture and tradition have to say about those questions [on the street], and new questions will arise.”

Growing up Christian and attending seminary at a time of heightening tensions between Buddhists and Hindus in his native Sri Lanka, Shanta Premawardhana realized early in his life that received theology – deriving from text, scripture and tradition – could have a limited role in guiding how to live, compared to the theology arising from the contexts of people’s daily lives. “What shall I eat tomorrow? How shall I find health care for my child? How shall I find a job? Those are in the end theological questions,” Premawardhana says. “At that point, it doesn’t matter what is your faith.”

Now, several decades later, Premawardhana has combined his extensive theological training with deep experience in grassroots organizing to be a global interfaith peacebuilder in some of the most conflict-ridden places of the world. He is President of the OMNIA Institute for Contextual Leadership, a Chicago-based organization which trains faith leaders – clergy and lay – to counter religious extremism and religion-based oppression, domination and violence. OMNIA trains people of faith to deconstruct theologies of exclusivism and superiority and reconstruct theologies of pluralism. It has trained over 3500 peacemakers around the world, who are organized into 158 Interfaith Peacemaker Teams in Nigeria, Sri Lanka and Bangladesh. Each Interfaith Peacemaker Team has about 20 faith leaders who collaborate across identity barriers, build power by organizing people and organizing money, and act collaboratively to address critical issues that arise from the ground.

At the same time, he was involved in interreligious dialogue, believing that the work of interfaith relations must move beyond theological conversations, and sought to bring seminary students to do theology differently. “Seminaries teach from the top down (received theology). But the theology we want students to take away is contextual theology. Theology must begin with the questions and struggles of people on the ground, … and we should seek scripture and tradition to respond to that,” Premawardhana has said.

OMNIA's method of contextual learning, L3M, "Listening to, Learning from, and Living in Deep Solidarity with those in Margins," equips leaders to dismantle top-down "received" theologies of exclusivity and superiority, and build bottom-up "contextual" theologies. OMNIA is the off-spring of SCUPE (Seminary Consortium of Urban Pastoral Education), which for 40 years trained seminary students in Chicago to take the context of the city seriously, and to build a theology from questions on the streets. In 2018, OMNIA received the prestigious Paul Carus Award for excellence in interfaith action by the Parliament of the World's Religions.

Prior to OMNIA, Premawardhana served as the Director for Interreligious Dialogue and Cooperation at the World Council of Churches in Geneva, Switzerland. He was also the Associate General Secretary for Interfaith Relations at the National Council of Churches, USA, where he initiated and co-led a dialogue table of senior Jewish and Christian leaders in the United States addressing critical questions of theology and justice, and also initiated a similar dialogue table with senior Muslim and Christian leaders. While serving as pastor of Ellis Avenue Church in Chicago for fourteen years, he engaged in community organizing in the South Side of Chicago. He is an emeritus trustee of the Parliament of the World’s Religions, National Council of Churches, USA, and Common Cause Illinois. He earned his MA and Ph.D. in Religion at Northwestern University in Evanston, Illinois, having attended seminary in Sri Lanka as well as in India prior to arriving in the United States in 1981. After his doctoral studies, he stayed in Chicago and founded the Chicago Ashram of Jesus Christ, a Christian community with an outreach to South Asian immigrants.

For Premawardhana, whose Christianity was informed by Buddhism to be always one of a disciplined journey rather than an arrived-at salvation, the “missional” mindset of many religions leads them to want to teach, not continue to learn. Premawardhana seeks to turn the mission paradigm upside down where those on the margins teach those in the privileged center: “Those who are hungry today have something important to teach us about economic justice, about faith, about resilience. When we get that, our questions are different, our answers are different. What’s wrong with our theology? How can we engage with those in the margins? Those in the margins will missionize us, will teach us, will convert us.”

Join us in conversation with this inspiring bridge- and peace-builder!

The ability to act. To know the power of relationships with friends, colleagues and neighbors near and far, including those from around the world, especially those in marginalized contexts.To have just enough resources: money, time and energy to do things that are deeply meaningful and measurable.

There's no one event or moment. But there have been many mentors, who's influence has been transformative. Among them:Father Aloysius Peiris, Father Tissa Balasuriya, Dr. Wesley Ariarajah, Mr. A.T. Ariyaratne (all from Sri Lanka). Mr. P.V. Rajagopal, Swami Agnivesh (from India)Ms. Mary Gonzales (from USA)

Prof. Edmund Perry (who was my doctoral advisor at Northwestern University) going out of his way to welcome my young family to the United States 40 years ago and caring for us as if we were his own family.