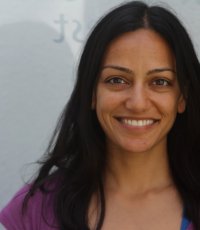 Pranidhi Varshney is a devoted ashtanga yoga practitioner and teacher, and the founder of Yoga Shala West, a community-supported ashtanga yoga studio in West Los Angeles. She teaches to share the deep love she has for yoga practice and for all students who follow this path. She aims to cultivate, for herself and for her students, a sense of balance on and off the mat – simultaneous strength and surrender.

A former actress, soulful singer, and entrepreneur of multiple forms of capital, Pranidhi Varshney is on a journey to deepen herself and her community in a greater sense of trust and interconnection. While studying theater and music at Northwestern University, Prandihi found herself on tour and landing in Los Angeles, where she pursued a career in acting for half a decade. A widening rift between the values of her work in the entertainment industry with her dedicated yoga practice prompted her to migrate and eventually transition completely into full time yoga teaching. In her own words, she writes, “I practice because yoga is the most effective tool I’ve found for inner transformation. I teach because it’s the most authentic way that I can be of service.”

Finding herself at odds with the consumer and image-driven nature of contemporary yoga, Pranidhi founded Yoga Shala West in 2015. The space not only offers classes to practice Mysore-style Ashtanga yoga, but has uniquely grown into a burgeoning community of practitioners who aspire to embody the deeper values – such as oneness, stillness, compassion – embedded in the heart of the practice.

Setting in place unique design elements – such as a contribution-based fee structure and high-quality student onboarding process – Pranidhi strives to create the conditions for deeper values to pulse through the operations. She explains, “Running a value-based business is so much more profitable than running a business based purely on financial capital, because the rewards can be seen, felt, and experienced in multiple forms.”

Open the doors to the shala, and you’ll be greeted with overflowing fruit from students’ backyards – all brought in in the spirit of sharing. And the basket the fruits sit in is itself a gift from another shala member. Walk a little further, and you’ll see an open source bookshelf, where anyone can take or leave a book. There’s a glow about the place that reflects the down-to-earth spirit with which it operates, and gives rise to spontaneous convergences of goodness. When the shala turned one, Pranidhi was compelled to spill forward the circle of kindness into the surrounding neighborhood. A crew of students responded by bringing in homemade desserts and together they shared in offering tasty treats and smiles to elders at the adjoining senior center. Small touches of care and possibility surround each day’s unfoldings – a quality that beautifully reflects Pranidhi’s way of being.

In addition to managing and teaching in the shala, Pranidhi produces open-source practice videos to support greater access to yoga and holds space for deeper experiments in leading with values. She writes regularly, has released a stirring album of Sanskrit chanting, serves as a Yoga Gives Back ambassador, sits on the advisory board of the Yoga and Body Image Coalition, and volunteers with ServiceSpace’s Laddership Circles and youth internships to continue to ignite transformation in herself and others. Through all her work, she aims to inspire, provoke, build community, and ultimately touch the heart.

Join us on June 3rd for an illuminating conversation with Pranidhi!

Being in relationship with people who are choosing to be their most vulnerable, authentic selves. Daily yoga practice strips us of the facades we normally carry with us as protection, and I feel incredibly honored to be witness to that type of transformation. Whether in the yoga room during practice or talking with a student after class, I find my purpose in creating a space where people feel free to bring their whole being. That extends beyond the yoga shala as well. I feel most alive when I'm holding space for myself and others to share what's in our hearts- often around a dinner table :)

My decision to take on a daily yoga practice comes to mind. That was in 2009 and was less a willful decision than an insight that came from within- one that emerged on its own without much effort. Since then, my practice has guided me through the joys, challenges, and changes of life. The other significant moment that comes to mind is meeting my husband. We met in 2010 and married in 2014. His support and the container of our relationship continue to nourish me and catalyze my growth.

There are so many! I'm reminded of a story that emerged during an in-person Laddership circle I had the joy to host at my house, in which one of the members of the circle told us about being gifted $1 by a homeless man on his birthday. That story then reminds me of the time I was gifted a quarter by a homeless man to cover my parking meter. As I reflect on more personal acts of kindness, I'm remembering my dad diving into a dumpster to find an item that I deemed too precious to let go of as a teenager. The sacrifices of a parent know no bounds ;) There are so many acts of kindness and love that have lit up my life- I could keep writing for a long time :)

Raise happy, grounded children, and eat all the good food ;)

Love yourself, the child within and the being you are now, expand that love to include others, and build a community around that love.