Gopal, Arti, Nine-Year-Old Ojasvi!: Losing Yourself to Find Yourself

Narmada Parikrama- Circumambulation Of The Soul

Narmada Parikrama (Pilgrimage) is a centuries old tradition of circumambulating the sacred river Narmada which emerges from the Maikal Hills of Madhya Pradesh, traverses through central India before immersing itself into the Arabian Sea in Gujarat. For more than 7,000 years, believers have set out on this 3400-kilometer-long expedition on foot, and describe it as a great spiritual practice for reconnecting with the self.

We happened to get in touch with a family of three who have been part of this odyssey of four months, and were happy to share their insights and learnings from the “Yatra” (Journey) with us. Arti Garg, Gopal Garg, and their nine-year-old daughter Ojaswi spoke to our moderator Trupti Pandya, a Narmada Yatri herself, letting us in on the many merits of this sacred exercise.

This blog is a mere recollection of the high points of the immensely invigorating conversation we had with the Garg family, and we propose listening to the complete talk (in Hindi) whenever you have the time and appetite for it.

Gopal shares that he had long been curious to see the real “Bharat” that still resides in the villages as opposed to the urban “India”. He has always viewed the act of walking as a meditative practice, as a “Sadhana” which allows you to travel inwards. The very idea of discovering his own country on foot felt like a calling from within, and he decided to go on the Yatra as soon as the Indian festival of Deepawali was over. His wife Arti and daughter Ojaswi were just as eager to do the Narmada Parikrama, and the family soon began to make preparations for their great journey.

Planning for the journey had to be done with extra care, especially since they were taking a child along. The roads can be pretty rough on a child, but given the intellectual nourishment and practical wisdom Ojaswi received throughout the journey, the family feels that it was pretty much worth the effort.

Gopal views traveling together as a great way of strengthening relationships, and arriving at a certain oneness of thought within the family. As the family walked from village to village along the banks of Narmada, sharing joys and tough times together, they have grown closer and kinder towards each other. Ojaswi quips in to tell us a story about how some women in some village taught her to draw water from a well, and then took her to their home for food. She interprets the incident as a lesson in sharing and caring, even with strangers. 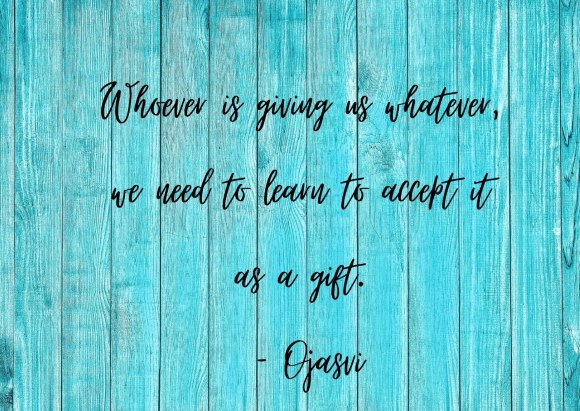 Before they embarked on the pilgrimage, the family took three vows and adhered to them during the entire course of their journey. The first vow was that they shall be covering the entire distance on foot, never taking help of a vehicle. The second vow said that they would always pray before starting out each day. The third vow was they would be worshipping Narmada Ji every morning and evening. While these vows helped them stay tethered to their goal of Narmada Parikrama, they also felt the need to add two more vows to the list, which were quite helpful in creating relationships with people they met along the way. The other two vows were about never criticising anybody, and to be detached from any conversation in which someone was being criticized.

Arti shares with us that the entire journey, from its very beginning, was made possible only through love. From her in-laws who supported their decision of going on the expedition, to the random strangers who offered help, food, and shelter whenever the family was in need, the entire journey presented itself as a great exercise in loving kindness. The family never went to sleep on an empty stomach, thanks to the villagers who would always see to it that they ate. Someone would always open up their homes to them when they needed to rest, no matter what village they were in, what time of the day it was. Gopal fondly reminisces how his grandmother used to make two extra Rotis each night, in case someone might need them. This age-old custom stayed put in rural India, with many households still keeping a little spare food every day for someone in need. The Garg Family found shelter in this custom whenever they felt hungry, for somebody or another always had two extra Rotis for the passing stranger.

Once when they were passing through a field, a farmer stopped them and asked them whether they had any food on them. When they replied in a no, he took out three Rotis from his shirt’s pocket and offered it to them. This poor person was willing to go hungry for people he had never met before in his life, and would probably never come across in future, and there could not have been a better lesson in kindness and humility. In rural regions where money loses its power, you learn to replace transactions with trust. You focus on building good relationships with the community, and learning to employ love as the supreme currency.

Leaving Everything to God

One day as they were travelling through a village, little Ojaswi got a bad stomach ache. As she was writhing in pain with her parents trying to think how to ease her condition, a woman showed up almost magically, and invited them into her home. She then said that since she had run out of tea leaves and milk, she could only offer them a tea of Tulsi and ginger. This was exactly what they needed at that time, and were overwhelmed with the sudden serendipity. Ojaswi felt much better after drinking the brew, and they could not be more thankful for the kind stranger.

The Garg family’s story is full of many incidents in which help appeared out of nowhere in their most vulnerable moments, hence cementing their belief in the greater force at action. From farmers to fishermen to saints to daily-wagers, everybody was always more than ready to help, never thinking twice before sharing their meagre belongings with these travelers. Ojaswi, at the tender age of nine, has learnt to accept help with gratitude. Having witnessed how comforting even a small deed of kindness can be to someone in need, she has resolved to pay it forward as she grows up.The pilgrimage has also presented Gopal and Arti with a fresh perspective on how to make lives better for others, and they plan to continue living a life of service. 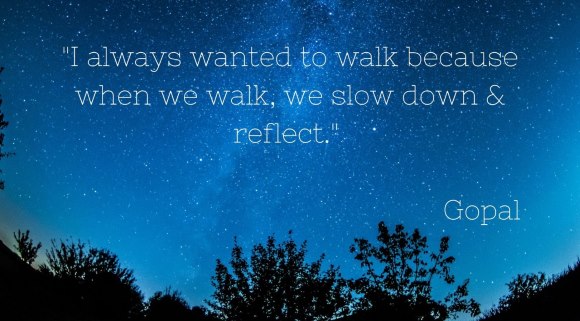