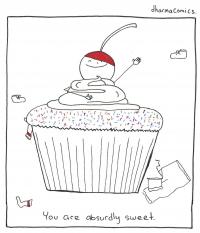 One of my meditation teachers was a man who had devoted many years to spiritual practice.  He had studied many spiritual texts, lived in monasteries under austere conditions, and done long meditation retreats.  He had had some very deep experiences.  Yet in spite of all this he still had one problem he had not been able to overcome: he was utterly attached to sweets.  In fact, he spent a significant amount of the very little money he had buying them.

Finally, one day he went to the market with a large box.  Going from one sweet stall to another, he filled the box with delicacies until his money ran out.  Then he went home, laid the sweets on his table, and meditated.  When his mind was clear, he took his first mouthful.

Summoning all his awareness, he noted every aspect of the experience.  He observed his eager anticipation as he reached for the first morsel, the sensations as the sweets filled his mouth, and the first taste of sweetness and the rush of pleasure that immediately raced through his mind.  Then he watched himself swallow and immediately reach for more.

Mouthful after mouthful, sweet after sweet, he continued to eat and observe.  After a while, he began to notice a change.  The sharp, sweet taste began to cloy rather than stimulate, and the rush of pleasure disappeared.

Still, he continued eating and watching.  Now the eager anticipation became distaste.  The intense sweetness, which had initially seemed so exciting, now felt vaguely sickening, and the sight of the remaining sweets only increased the feeling.  He continued to eat until he had to force himself to eat another sweet.  By the time he finally got up from the table, he had cured his attachment to sweets forever.

Of course, indulging a craving is no guarantee of a cure.  If it were, alcoholics would drink themselves sober instead of dead.  However, when indulgence is used occasionally and skillfully, with careful awareness and in the context of a spiritual practice, it can sometimes be very valuable.

Seed questions for reflection: How do you relate to the notion of indulging in our attachments to get over them? How can this be done skillfully? Can you share a personal experience where indulging an attachment helped you overcome it?

Every week, we send out a digest with a reading and inspiring stories to our global community of 93,092 people. Subscribe below.