Meaning of Yin and Yang 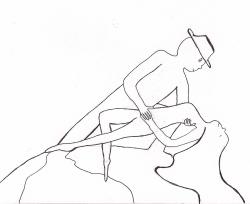 Everything has a right to live.  Everything wants to exist and we have to respect that.  The weaker side in any relationship naturally demands things, because of the need for mutual balance.  War, sickness, unhappiness is imbalance.  You can get sick from either over-eating or under-nourishment; excess yin or excess yang.  Peace, health, happiness, is balance.  The same for justice.  In this restaurant, for example, justice in business exists if the owner can make a living and if you also feel that the price is right.  Both sides of the picture are satisfied and stabilized.
Many people don't understand that neither yin nor yang exists by itself.  Yin and yang means communication.  Communication breaks down in two ways.  For example, if I communicate with someone by touching his arm, my hand moves, so it is yang, while his arm is motionless, or yin.  If neither of us moves, or if both of us are in motion, no communication can occur.
Its the same thing as dancing.  One partner usually leads, and the other follows.  Both have the right to exist; the leading depends on the following and the following depends on the leading and both recognize that.  That point of it, the communication, is the transfer of energy taking place between the two.  The purpose is not superiority or inferiority of one or the other individual, but the flow between them.  In a ballroom stance, for example, the woman's hand goes on the man's shoulder and the man's hand is on her back.  For a different partner, his hand is higher or lower and the elbows are at different angles.  If we don't understand the most suitable position for our partner-beings in life, war occurs.
We must learn the purpose the dance: not playing roles, such as leader and led, for their own sake, but to understand each other.  In this kind of cooperation, the minimum effort gives maximum result.  The basis of peace is not an abstract quality, but cooperation, seeing each other as human beings.  We must recognize our wonderful differences, without discrimination or value judgements.  Discrimination makes war.  For me, the meaning of yin and yang is the power of that respect for everything's nature.
--Masahiro Oko

Seed questions for reflection: What does yin and yang mean to you? How do you reconcile "discrimination makes war" with the need to discriminate between that which is wholesome and unwholesome? Can you share a personal story where you were able to co-create "this kind of cooperation," where "the minimum effort" gave the "maximum result?"

Every week, we send out a digest with a reading and inspiring stories to our global community of 93,097 people. Subscribe below.