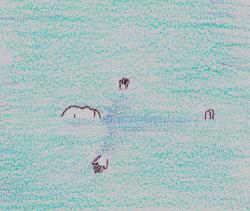 Young as you are, I know you already know something about faith.  You have faith in your mother's arms.  That's a good start.  But later on, you'll find it gets more complicated.

Not long ago, I was talking with a woman who got me thinking about what faith really is.  She was in her mid-forties, and in therapy she said she felt as if she had been "treading water" her whole life.
"What if you stop?" I asked.
Between you and me, Sam, that is not my most brilliant intervention.  But it's a good question.  What does happen when you stop treading water?  Either you sink or you float.
This woman felt as if she had spent most of her life treading water because she was fighting something inside herself.  Some people do that all the time.  They fight against fear of death, fear of being "found out", fear of losing their minds, fear of realizing they are not the people they should be, fear of becoming who they are.  But as this woman was thrashing against the water, deep down she knew she would lose the fight.
So when I suggested that she stop treading water, I realized the difference between those who sink and those who float.  The very moment you give up struggling with the water, if you're going to float, you have to put your faith in the water -- just lie back and let it hold you up.
--Daniel Gottlieb, in Letters to Sam

Seed questions for reflection: Reflecting on your life, have you had an experience where you've been "treading water," and had to let go to allow the water to "hold you up?" What does having faith in that which scares you mean to you? How can we develop such a faith?