Make Your Life Into a Giving 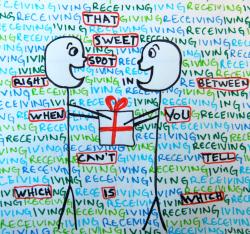 Make your life into a giving. When I say a giving, it is not to be understood as an act. Giving as an act is a deception because, after all, what can you give? Everything that we have, including this body, we have taken from this planet. What we can give is only a paltry part of what we have taken. Giving as an act could be very deceptive and could turn ugly, but if your way of being is giving and your actions are only a manifestation of that, when you open your heart to give, grace invariably seeps in. That is inevitable.

It has been my fortune and privilege that at a very early age, I became witness to a certain state of giving -- my great grandmother who lived to be 113 years of age.  In the morning, if she was given breakfast, she would always go about giving away at least two-thirds of it to the ants, birds and squirrels, particularly to the ants.  People would say, ‘She is throwing all her food around, this old woman will die without eating,' but they all died while she lived.  There were many days where I saw her with a little bit of breakfast that was left on her plate. She would simply sit there, watching the ants eat. Tears would be streaking down her cheeks and when somebody asked, ‘Won't you eat?’ she would say, ‘I'm full. I'm already full.’ It was many years later that I realized her way of transacting with the world. If the ants ate, she was being nourished. A logical mind would never understand this, but it was this nourishment which gave her an extraordinary longevity.
Each of us can also make every act and every breath into a process of giving – seeing how we can contribute to everything around us, no matter what we are doing.  In just 24 hours, we will be so rich that the experience of life, the beauty of life, will set a glow on our face because that is the only way life functions.  The whole process of life is a giving. It is a transaction. In every giving there is a taking. We are taking more than we are giving, but in your mind, just ignore the taking. You just keep giving because you do not have to take; it will be pushed into you.
There was a man who cleared one hundred acres of forest and made it into farmland. His two sons helped him and they became prosperous. When the man was dying, he called his two sons and told them that the land should never be divided, but the produce should be taken equally, fifty percent, by each son.
Accordingly, they went by their father’s word. One of the brothers got married and had five children. The other one never got married. Life went on and they each took fifty percent. One day, a thought entered the mind of the brother who had a wife and five children: "I'm getting fifty percent; my brother is also getting fifty percent. But I have a wife and five children while my brother has nobody. When he gets old, who will take care of him? He should have a little more than me because I have the wealth of my children. But he is too proud; he will not take it from me." So in the dark of the night, he carried a bagful of grain quietly and walked into his brother’s store, dropped this bag and walked back. Whenever he could, he went on doing this.
The same thought also entered his brother's mind. He thought, "I am alone, my brother has five children to feed and I am getting fifty percent, but if I give him extra, he will not take it." So he started doing the same thing at night. This went on for many years and both of them never noticed. One night, both of the brothers carrying sacks of grains in secrecy walked towards each other's storehouse and came face to face. Suddenly, they realized what was happening.
--Jaggi Vasudeva

Every week, we send out a digest with a reading and inspiring stories to our global community of 93,109 people. Subscribe below.