Liking Is for Cowards. Go for What Hurts. 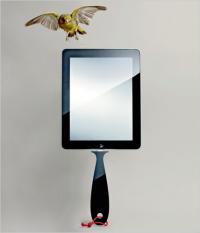 When I was in college, and for many years after, I liked the natural world. Didn’t love it, but definitely liked it. It can be very pretty, nature. And since I was looking for things to find wrong with the world, I naturally gravitated to environmentalism, because there were certainly plenty of things wrong with the environment. And the more I looked at what was wrong — an exploding world population, exploding levels of resource consumption, rising global temperatures, the trashing of the oceans, the logging of our last old-growth forests — the angrier I became.

Finally, in the mid-1990s, I made a conscious decision to stop worrying about the environment. There was nothing meaningful that I personally could do to save the planet, and I wanted to get on with devoting myself to the things I loved. […]

But then a funny thing happened to me. It’s a long story, but basically I fell in love with birds. I did this not without significant resistance, because it’s very uncool to be a birdwatcher, because anything that betrays real passion is by definition uncool. But little by little, in spite of myself, I developed this passion, and although one-half of a passion is obsession, the other half is love.

And so, yes, I kept a meticulous list of the birds I’d seen, and, yes, I went to inordinate lengths to see new species. But, no less important, whenever I looked at a bird, any bird, even a pigeon or a robin, I could feel my heart overflow with love. […]

And here’s where a curious paradox emerged. My anger and pain and despair about the planet were only increased by my concern for wild birds, and yet, as I began to get involved in bird conservation and learned more about the many threats that birds face, it became easier, not harder, to live with my anger and despair and pain.

How does this happen? I think, for one thing, that my love of birds became a portal to an important, less self-centered part of myself that I’d never even known existed. Instead of continuing to drift forward through my life as a global citizen, liking and disliking and withholding my commitment for some later date, I was forced to confront a self that I had to either straight-up accept or flat-out reject.

Which is what love will do to a person. Because the fundamental fact about all of us is that we’re alive for a while but will die before long. This fact is the real root cause of all our anger and pain and despair. And you can either run from this fact or, by way of love, you can embrace it.

When you stay in your room and rage or sneer or shrug your shoulders, as I did for many years, the world and its problems are impossibly daunting. But when you go out and put yourself in real relation to real people, or even just real animals, there’s a very real danger that you might love some of them.

And who knows what might happen to you then?

--Jonathan Franzen, in Liking Is for Cowards. Go for What Hurts.