A 9-Year-Old's Hidden Self 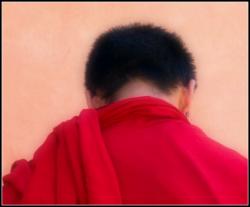 The quality and strength of Lobsang's inner being was also brought home to me through an event that took place in my home.  After one of his weekends working with our translation group, he stayed for a few days as a guest in my house in San Francisco.  One morning at the breakfast table we were discussing this and that, I don't remember what.  My nine-year-old daughter, Eve, was present.  Ordinarily, she tended to be shy, especially when strangers or guests were present.  But at one point in the conversation, during a brief pause, she looked up at Lobsang and without any preamble she asked him: "What happens when people die?"

I was startled and a certain warmth rose up in me.  It was obvious she had been keeping this question for a long time inside herself, without letting anyone know.  My own attempts to make room in our relationship for this kind of question had not gone anywhere, or so it has seemed to me.  But now, suddenly, I felt her hidden self and felt that strength of its need.  How would Lobsang respond?  I set myself to listen to him with as much eagerness as my daughter.

Lobsang turned toward her with his warm, brown face and his lucent black eyes and began talking to her as though she were, like him, simply a normal human being for whom such questioning was as natural and as important as eating, a human being who was, like him and like all of us, someday going to die.  I don't remember the content of what he said to her; I do remember thinking that what he said was not extraordinary -- things that any serious adult might say to a serious, inquiring child.  But what I do remember as vividly as though it were yesterday was the "resonance" of his voice, the stillness of his body and the warm attention in his face.  I remember sensing the vibration of a certain kind of energy passing between Lobsang and my daughter that served more as answer to her question than any words by themselves could have.  I saw her eyes deepen as though they were seeing something strong and new -- not outside herself, but inside herself.

Perhaps she did not realize what was happening inside herself.  Maybe she still doesn't know.  But I saw it.  A quality of attention was passing between Lobsang and my daughter that is becoming more and more rare in our common world.  And it is this "something" that desperately needs to pass between people.  It is the mutual flow of this special quality of attention between human beings that all people, whether they know it or not, are starved for.  Not all the praise, touching, words, teaching, smiling, sympathizing, serving good causes -- not any or all of it can do what this quality of shared attention can do.  Its lack is more of a threat to our world than anything else -- or, rather, its increasing absence in human relationships is at the root of all else that now threatens to destroy or degrade us beyond recovery -- the internecine hatred and egoism and immorality that is crowding out not only our ancient, traditional ways of life, and the life of nature itself, but which is also crowding out the human memory of what mankind is, and is made for.

--Jacob Needleman, in What is God