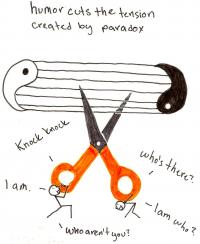 In the Greek tradition, tragedies were four act plays that ended sadly and badly -- kind of like situation comedies without the laugh track. Comedies, on the other hand, had a fifth act where the sad or bad circumstance that ended Act IV is resolved.  So ... comedy encompasses tragedy, thanks to an Act V.

Thinking of life as a comedy in this sense would seem counterintuitive. Far, far more humans exit this world suffering than do laughing. However, the presumption there is that the end of earthly life is the end of existence.  As physicists have discovered, it seems that all of existence is “here now” -- and through our perceptions, we the observers choose reality on a “need to exist basis.”  In this sense, there is no such thing as past or future.  Everything that has ever existed or ever will exist is in existence now.
Meanwhile, we have the numerous and often similar reports of “near death experiences,” where those who return report seeing blinding light, feeling overwhelming love, meeting divine entities and loved ones.  Are these experiences “real?”  Are they just a function of brain chemistry offering one last chemical impulse?
Of course, our current dominant paradigm of scientific materialism would have us believe that these experiences are purely chemical.  On the other hand, we have thousands of years of human spiritual tradition that tells us otherwise.  Among those stories is the story of a Tragedy, and a Comedy.  The story of the crucifixion would have been a tragedy ... had it ended there.  However, a fifth act has been added on to the story.  The Resurrection transforms the tragedy into a Comedy. Whether or not you buy the body of beliefs that comprise Christianity, don’t you think it’s significant that the leading western religious authority all but proclaims that life is a comedy?  And if that’s the case, why aren’t they laughing?  Why aren’t we laughing?
We aren’t laughing because we have been conditioned to believe that life is serious.
Perhaps this conditioning to seriousness is why the world is in such serious condition.  Perhaps to get to both the “ha ha” that is the punch line to life, and the “aha” we get when we awaken in the wake of cosmic laughter, we need to look at life itself as a journey to “fool realization.”
--Steve Bhaerman a.k.a. Swami Beyondananda, from "Wake up Laughing"