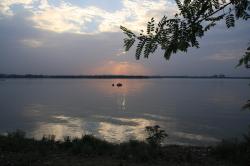 In graduate school, I had one professor who encouraged us to notice what surprised or disturbed us. If we were surprised by some statement, it indicated we were assuming that something else was true. If we were disturbed by a comment, it indicated we held a belief contrary to that. Noticing what disturbs me has been an incredibly useful lens into my interior, deeply held beliefs. When I'm shocked at another's position, I have the opportunity to see my own position in greater clarity. When I hear myself saying "How could anyone believe something like that?!" a doorway has opened for me to see what I believe. These moments of true disturbance are great gifts. In making my beliefs visible, they allow me to consciously choose them again, or change them.

What if we were to be together and listen to each other's comments with a willingness to expose rather than to confirm our own beliefs and opinions? What if we were to willingly listen to one another with the awareness that we each see the world in unique ways? And with the expectation that I could learn something new if I listen for the differences rather than the similarities?

We have this opportunity many times in a day, everyday. What might we see, what might we learn, what might we create together, if we become this kind of listener, one who enjoys the differences and welcomes in disturbance? I know we would be delightfully startled by how much difference there is. And then we would be wonderfully comforted by how much closer we became, because every time we listen well, we move towards each other. From our new thoughts and our new companions, we would all become wiser.

It would be more fruitful to explore this strange and puzzling world if we were together. It would also be far less frightening and lonely. We would be together, brought together by our differences rather than separated by them. When we are willing to be disturbed by newness rather than clinging to our certainty, when we are willing to truly listen to someone who sees the world differently, then wonderful things happen. We learn that we don't have to agree with each other in order to explore together. There is no need to be joined together at the head, as long as we are joined together at the heart.

Every week, we send out a digest with a reading and inspiring stories to our global community of 93,478 people. Subscribe below.