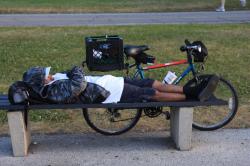 But the difference between what we call the apostolic and the contemplative orders, or vocations, is that the apostolic approach says, “We live in this world, we’re responsible for it, and we have to do something to change the world for the better.” The monastic answer is, “We are not strong enough to change the world in general. Let’s change that little spot where we are. And let’s put a wall around it and say this is as far as we go, as far as our strength reaches. And now within that narrow confine, let’s change the world, make it more what it’s supposed to be.”

That approach has its drawbacks, too, because it can become ingrown, its own private little affair. And the apostolic approach has limitations, because it can become so watered down that nothing spiritual remains. So we need the two; they are the poles of one continuum. People who are now engaged in apostolically changing the world need to come back periodically to a monastic environment where what they are trying to achieve everywhere is to a certain extent achieved already. And if the world could gradually become what a good monastery or Zen center is, that would be fine. The monastic communities can provide the strength, the encouragement to realize that true order can be achieved.

Every week, we send out a digest with a reading and inspiring stories to our global community of 93,487 people. Subscribe below.