Underneath All Victories and Defeats 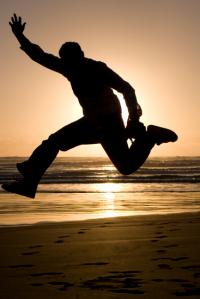 In the midst of some activity, even the activity of reading this now, it is completely possible to allow your mind to open fully, and in that opening to discover the peace and fulfillment of your own spacious awareness.

No place to go, no thing to get, no goal to be realized; no body to change no perfection to be attained. Simply, in this very moment, you can recognize what is always here. Here underneath all the lists and underneath all the victories and defeats.

In meeting yourself, free of all should's and must's and will's, for even a moment, you realize that even if nothing gets fixed or done, simple natural fulfillment is already here.

Of course there is much in our world, our bodies, and our minds that could use fixing. And part of the human evolutionary thrust is to use our mental capacities to discover what is wrong -- outside and inside -- and then to begin the work of correction by removal or augmentation. What a truly awesome power of mind. It is a hallmark of the capacity of the human brain.

The problem arises when this evolving, mistake-searching aspect of mind rules the life form called by your name. And this problem is huge in our culture.

How much of your attention is focused on what is wrong with yourself or others?

When we see how much is wrong or harmful in our thinking and our and others' actions, we can be overwhelmed by the tasks revealed. This overwhelm can result in giving up and reverting to cynicism or in strengthening our resolve to work even harder. To think and do more.

I am actually suggesting that before the overwhelm, or even in the midst of overwhelm, it is possible to stop, if only for a moment, and return to silence. In that moment, there is the recognition that to be internally free and at peace, nothing needs to be done.

Even a moment of true silence allows for true choice, for authentic, appropriate action or non-action to follow.

Some spiritual traditions refer to this silence as no mind. But for me that term is too close to mindless as in ignorant or stupid. I prefer the term open mind. The open mind is spacious and aware. It finds nourishment in itself, intelligent and aware without the need to follow thought.

In truth, all creative and fresh thinking comes out of this nourishment of aware silence. And it is available for you right now.