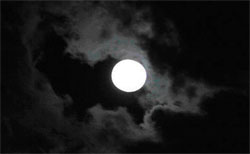 The example of the newly blinded man is so concrete, I wish I could use it as a type for all life-training. When he first loses his sight he thinks there is nothing left for him but heartache and despair. He feels shut out from all that is human. Life to him is like the ashes on a cold hearth. The fire of ambition is quenched. The light of hope is gone out. The objects in which he once took delight seem to thrust out sharp objects at him as he gropes his way about. [...] Then comes some wise teacher and friend and assures him that he can work with his hands and to a considerable degree train his hearing to take the place of sight. Often the stricken man does not believe it, and in his despair interprets it as mockery. Like a drowning person he strikes blindly at anyone who tries to save him. Nevertheless the sufferer must be urged onward in spite of himself, and when he once realizes that he can put himself in connection with the world, [...] a being he did not dream of before unfolds itself within him. If he is wise, he discovers at last that happiness has very little to do with outward circumstances, and he treads his dark way with a firmer will than he ever felt in the light.

Likewise those who have been mentally blinded "in the gradual furnace of the world" can, and must, be pressed to look for new capabilities within themselves and work out new ways to happiness. They may even resent faith that expects nobler things from them [...] How little we know ourselves! We need limitations and temptations to open our inner selves, dispel our ignorance, tear off disguises, throw down old idols, and destroy false standards. Only by such rude awakenings can we be led to dwell in a place where we are less cramped, less hindered by the ever-insistent External. Only then do we discover a new capacity and appreciation of goodness and beauty and truth.