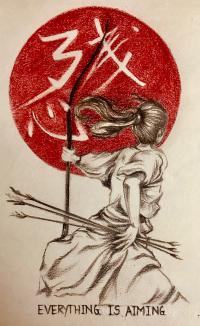 In the 1920s, a German professor named Eugen Herrigel moved to Japan and began training in the martial art of archery, with a legendary archer named Awa Kenzo. Kenzo was convinced that beginners should master the fundamentals of archery before attempting to shoot at a real target, and he took this method to the extreme. For the first four years of his training, Herrigel was only allowed to shoot at a roll of straw just seven feet away.

When Herrigel complained of the incredibly slow pace, his teacher replied “The way to the goal is not to be measured! Of what importance are weeks, months, years?”

When he was finally permitted to shoot at more distant targets, Herrigel’s performance was dismal. The arrows flew off course and he became more discouraged with each wayward shot. During a particularly humbling session, Herrigel stated that his problem must be poor aim.

Kenzo, however, looked at his student and replied that it was not whether one aimed, but how one approached the task that determined the outcome. Frustrated with this reply, Herrigel blurted out, “Then you ought to be able to hit it blindfolded.”

That night, Kenzo took Herrigel to the practice hall, with the target hidden in the dark. Settling into his firing stance, Kenzo drew the bow string tight, and released the first arrow into the darkness. Bullseye. He drew another one. Bullseye again.

Complete awareness of body and mind in relation to the goal is known as 'zanshin'. Literally translated, zanshin means “the mind with no remainder.” In other words, the mind completely focused on action.

We live in a world obsessed with results. Like Herrigel, we have a tendency to put so much emphasis on whether or not the arrow hits the target. If, however, we put that intensity and focus and sincerity into the process -- where we place our feet, how we hold the bow, how we breathe during the release of the arrow -- then hitting the bullseye is simply a side effect.

James Clear is an author, entrepreneur and photographer. Excerpt above is taken from this blog. More about Eugene Herrigel in Zen in the Art of Archery (also available as PDF).

Every week, we send out a digest with a reading and inspiring stories to our global community of 93,128 people. Subscribe below.