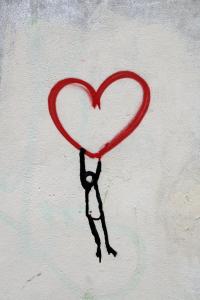 When a parent sees their child is about to be attacked by someone, it doesn't matter how peaceful and calm they normally are, most parents would still resort to violence (or much worse) in order to protect their loved ones. In that scenario, you could argue that their violence is fueled by love, right?

We are only talking about conditional love in this example, not some altruistic compassion for all sentient beings (which would also include the attacker in this instance). We are talking about a very intense and passionate love for that which we personally hold dear.

By using that same logic, it's now easier to understand why some people are so hateful, racist, homophobic, or prejudiced: they are simply defending what they personally hold dear. As soon as they feel their values, traditions, or ideals are being attacked, their impulse is to protect, defend, and fight against anyone who threatens them.

Is it possible that even what we often perceive as a "hate crime," for example, is actually fueled by love? A love that is misplaced or blind at best, but love just the same?

Don't get me wrong; I'm not justifying violence, crime, or war in any way, I am only trying to apply the theory that "hurt people hurt people" so that I can better understand all the fighting in the world. It's as if everyone is protecting something, which would explain so much. If we justify the parent's violence in the example above as nothing more than their attempt to protect what they love, then it's easier to understand how one person's terrorist is another person's freedom fighter. Even greed is nothing more than someone's love affair with always wanting "more," and intolerance is just a heated resistance to change.

The reality is that we can't control what other people do or how they see the world, but maybe we can start to see it all through the lens of love (haters included). Can we accept that when someone is hurting deeply within themselves, their pain spills over until they start hurting everyone around them? According to Thich Nhat Hanh, this is their cry for help, and what they need is our understanding, not judgment. Because when we hate the hater, we become haters ourselves.

So here is my food for thought and invitation [...]: let's extend our own love and compassion to include EVERYBODY. When we see someone screaming, yelling, and protesting against something, can we look beyond their anger and hatred to what they actually love and are simply trying to protect? Would this subtle shift open our own hearts to truly include everyone, not just those whom we happen to personally hold dear?

Nobody's hate is justified, but perhaps it can be understood.

Timber Hawkeye is the author of Buddhist Boot Camp.  Drawing from his wide-ranging experiences, he offers approaches to peace, within and around us in the world.

Seed questions for reflection: How do you relate to looking beyond someone's anger and hatred to what they actually love and are simply trying to protect? Can you share a story of a time you were able to do this and see a difficult situation through the lens of love? What helps you avoid the trap of hating the hater?