Wonder of the Universe is Wondering In Us 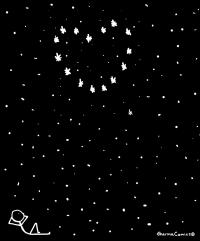 The universe is very big and very old. It was only discovered by us in the twentieth century. When you look up at the night stars you aren’t seeing it. Our Milky Way galaxy alone has billions of stars, but we can see only thousands with our naked eyes. There are billions of galaxies like the Milky Way that can be seen through our telescopes, and the light by which we see distant galaxies has traveled for billions of years to enter the telescopic lenses. There may even be other universes. Our universe can be seen through the Hubble Space Telescopes and has been expanding since its origin fourteen billion years ago.

We are animals born to hunt, multiply, and adapt. Our brains grew to help us survive, and they set limits to our understanding. We can’t grasp the dimensions that numbers tell us about the age or size of the universe. The complexity of so many light-years and galaxies is overwhelming. In order to reduce our fears, we imagine we see patterns and parents, explanations and conclusions, often seeking comfort and security rather than accurate information. Yet we also can remain curious, inconclusive, hovering in wonder, unknowing in order to know more.

Our bodies contain octillions of atoms organized into intricate and functional patterns. All of our atoms came from Earth, which itself descended from previous suns and supernovae explosions. In our red blood cells, we contain cobalt, an element which is made only in supernovae. Our bodies are formed by trillions of cells that interact and cooperate. The numbers of atoms and cells are too big, and their interactions are too complex, rapid, and information-dense for us to understand. Our cells utilize chemical pathways that evolved in slow, interlocking success stories across billions of years. It took the history of the Earth for our complex brains and thoughts to become possible within life-forms.

We exist within a whole planet system. Green plants are the only living thing that can capture electromagnetic photons from the sun and turn invisible energy into sizzling bonds between atoms, to create the large molecules we call “food.” Plants also create the oxygen molecules we breathe. We breathe out the carbon dioxide that plants eat. All of life is interdependent and begins with sunlight, that comes from hydrogen atoms being fused in the sun. These solar hydrogen atoms are congealed from the energy that was released at the origin of the universe, which is everyone’s birth canal.

Paul R. Fleischman is a retired American psychiatrist, writer and meditation teacher in the tradition of S. N. Goenka. Excerpted from his book, Wonder: When and Why the World Appears Radiant.

Seed questions for reflection: How do you relate to the notion that our wondering minds are products of the universe? Can you share a personal experience of a time you realized that the wonder of the universe is wondering in us? What practice helps you connect with wonder and inquire into it?