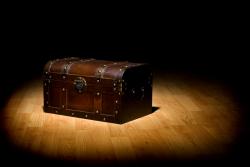 This, I believe, is the central question upon which all creative living hinges: Do you have the courage to bring forth the treasures that are hidden within you?

Look, I don't know what's hidden within you. [...] You yourself may barely know, although I suspect you've caught glimpses. I don't know your capacities, your aspirations, your longings, your secret talents. But surely something wonderful is sheltered inside you. I say this with all confidence, because I happen to believe we are all walking repositories of buried treasure. I believe this is one of the oldest and most generous tricks the universe plays on us human beings, both for its own amusement and for ours: The universe buries strange jewels deep within us all, and then stands back to see if we can find them.

The hunt to uncover those jewels—that's creative living. The courage to go on that hunt in the first place—that's what separates a mundane existence from a more enchanted one.

The often surprising results of that hunt—that's what I call Big Magic.

One of the coolest examples of creative living that I've seen in recent years, for instance, came from my friend Susan, who took up figure skating when she was 40 years old. To be more precise, she actually already knew how to skate. She had competed in figure skating as a child, but she'd quit the sport during adolescence when it became clear she didn't have quite enough talent to be a champion.

For the next quarter of a century, Susan did not skate. Then she turned 40. She was restless. She felt drab and heavy. She asked herself when was the last time she'd felt truly light, joyous and -- yes -- creative in her own skin. To her shock, she realized that the last time she'd experienced such feelings had been as a teenager, back when she was still figure skating. She was appalled to discover that she had denied herself this life-affirming pursuit for so long, and she was curious to see if she still loved it.

So she followed her curiosity. She bought a pair of skates, found a rink, hired a coach. She ignored the voice within her that told her she was being self-indulgent and preposterous to do this crazy thing. She tamped down her feelings of extreme self-consciousness at being the only middle-aged woman on the ice, with all those tiny, feathery nine-year-old girls.

She just did it.

Three mornings a week, Susan awoke before dawn and went skating. And she skated and skated and skated. And yes, she loved it, even more than ever, perhaps, because now, as an adult, she finally had the perspective to appreciate the value of her own joy. Skating made her feel alive and ageless. She stopped feeling like she was nothing more than a consumer, nothing more than the sum of her daily obligations and duties. She was making something of herself, making something with herself.

It was a literal revolution, as she spun to life again on the ice.

Please note that my friend did not quit her job and move to Toronto to study 70 hours a week with an Olympic-level skating coach. And no, this story does not end with her winning any medals. In fact, this story does not end at all, because Susan is still figure skating -- simply because skating is still the best way for her to unfold a certain beauty and transcendence within her life. That's what I call creative living.

Seed questions for reflection: What does "creative living" mean to you? Can you share a personal story of a time you were able to tap into what makes you truly light, joyous and creative in your own skin? What helps you tap into creative living?