Practice of Being Real 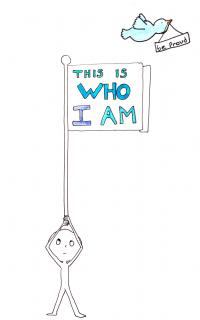 The practice of being real is something highly underrated. We have been taught to appear in certain ways to get the approval of others. We may have fallen prey to the image makers who tell us how to dress, what colors are “ours” and how to be politically correct. The pressure to fit in is strong but not very intelligent. The really great people we admire, the ones who have contributed to our greater good, are always those who refuse to comply! They invariably are radical thinkers, fearlessly individual but at the same time allow for others to also stand out.

Shakespeare said it best “to thine own self be true and as the night follows the day, thou canst be false to any man.” Those who know who they are, are not confused about what is theirs to do! They are able to enroll others by simply being present with their energy and vision. This is spiritual maturity. The opposite of that is psychologically adolescent. We are all unique and have something to bring unlike anyone else. To be afraid to shine is to deny our spiritual nature.

That being said, being real does not mean complaining and holding others responsible for our experience. Martin Luther King Jr. did not complain. He had a vision and he stood up for it, unwilling to be silenced. He learned from Gandhi, but he did not copy him or dress like him or shave his head. He brought his own true self into the movement for freedom that Gandhi modeled so well. We are not a different species of human from these two fine examples, but we do need to drop the pretenses and let ourselves be seen and known for who we truly are.

Carol Carnes ​is a New Thought teacher, an ordained minister of International Centers for Spiritual Living, a world traveller who has been in the company of HH the Dalai Lama and other world leaders in small group dialogues. She is a member of the Association for Global New Thought and an inductee into the Martin Luther King International chapel Board of Preachers at Morehouse College.

Seed questions for reflection: What does the practice of being real mean to you? Can you share a personal experience of a time you were not afraid to shine? What helps you avoid falling into the trap of the ego while being true to your voice?

Every week, we send out a digest with a reading and inspiring stories to our global community of 93,957 people. Subscribe below.