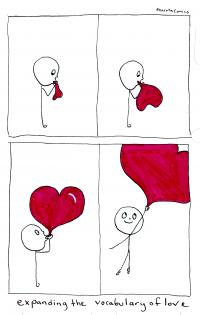 The first difficulty we meet in discussing anything concerning our feelings is that we have no adequate vocabulary to use. Where there is no terminology, there is no consciousness. A poverty-stricken vocabulary is an immediate admission that the subject is inferior or depreciated in that society.

Sanskrit has ninety-six words for love; ancient Persian has eighty, Greek three, and English only one. This is indicative of the poverty of awareness or emphasis that we give to that tremendously important realm of feeling. Eskimos have thirty words for snow, because it is a life-and death matter to them to have exact information about the element they live with so intimately. If we had a vocabulary of thirty words for love ... we would immediately be richer and more intelligent in this human element so close to our heart. An Eskimo probably would die of clumsiness if he had only one word for snow; we are close to dying of loneliness because we have only one word for love. Of all the Western languages, English may be the most lacking when it comes to feeling.

This is vividly demonstrated by our meager vocabulary of feeling words. If we had the expanded and exact vocabulary for feeling that we have for science and technology, we would be well on our way to warmth of relatedness and generosity of feeling.

Robert Johnson, in The Fisher King and the Handless Maiden. ​In 1945, he went to Ojai, California, as a student of Jiddu Krishnamurti, an Indian spiritual teacher. In 1947 he began his own therapy with Fritz Künkel. He later studied at the C. G. Jung Institute in Zürich, Switzerland, where Emma Jung, the wife of Carl, was his principal analyst. He completed his analytical training with Künkel and Tony Sussman. He established an analytical practice in Los Angeles in the early 1950s with Helen Luke. In the early 1960s he closed his practice and became a member of St. Gregory's Abbey, Three Rivers, in Michigan, a Benedictine monastery of the Episcopal Church.

Seed questions for reflection: How do you relate to the notion that superiority in one function only comes at the expense of the other? Can you share a personal experience where you gained insights by seeing the impoverishment of either function in your life? How might we balance the thinking and feeling functions?

Every week, we send out a digest with a reading and inspiring stories to our global community of 93,973 people. Subscribe below.