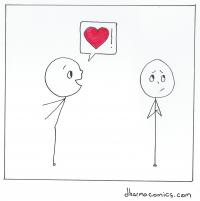 I wanted to laugh more, I wanted to show more loving-kindness, and I also wanted to be more enthusiastic. I knew that it wasn't nice to criticize but it was fun. Why was it so deliciously satisfying to criticize? Being critical made me feel more sophisticated and intelligent — and in fact, studies show that people who are critical are often perceived to be more discerning. In one study, for example, people judged the writers of negative book reviews as more expert and competent than the writers of positive reviews, even when the content of both reviews was deemed to be of high quality. Another study showed that people tend to think that someone who criticizes them is smarter than they are. Also, when a person disrupts a group's unanimity, he or she lessens its social power. I've seen people exploit this phenomenon; when a group is cheerfully unanimous on a topic like 'The teacher is doing a great job' or 'This restaurant is terrific,' such a person takes the opposite position to deflate the group's mood. Being critical has its advantages, and what's more, it's much easier to be hard to please. Although enthusiasm seems easy and undiscriminating, in fact, it's much harder to embrace something than to disdain it. It's riskier.

When I examined my reactions to other people, I realized that I do often view people who make critical remarks as more perceptive and more discriminating. At the same time, though, it's hard to find pleasure in the company of someone who finds nothing pleasing. I prefer the company of the more enthusiastic types, who seem less judgmental, more vital, more fun.

For example, one evening, as part of a surprise birthday party for a close friend, we went to a Barry Manilow concert, because my friend loves Barry Manilow. Afterward, I reflected that it showed considerable strength of character to be such an avowed Barry Manilow fan. After all, Barry Manilow is . . . well, Barry Manilow. It would be so much safer to mock his music, or to enjoy it in an ironic, campy way, than to admire it wholeheartedly as she did. Enthusiasm is a form of social courage. What's more, people's assessments are very influenced by other people's assessments. So when my friend said, 'This is terrific music, this is a great concert,' her enthusiasm lifted me up.

I wanted to embrace this kind of zest. I steeled myself to stop making certain kinds of unnecessarily negative statements: 'I really don't feel like going,' 'The food was too rich,' 'There's nothing worth reading in the paper.' Instead, I tried to look for ways to be sincerely enthusiastic.

Gretchen Rubin is an American author, blogger and speaker.[1] She is author of the best selling The Happiness Project: Or Why I Spent a Year Trying to Sing in the Morning, Clean My Closets, Fight Right, Read Aristotle, and Generally Have More Fun,

Every week, we send out a digest with a reading and inspiring stories to our global community of 93,517 people. Subscribe below.