What Is Your Storyteller Doing? 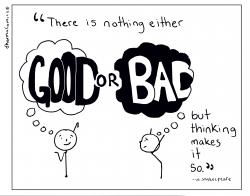 At 8:28 AM I slipped into the pool at my gym for my half hour swim. There was a water aerobics class that began at 9:00, which left just enough time for me to complete my swim. At around 8:55 a number of people had jumped into the first lane and were chatting before the class. I was in the second lane and a man was in the third. At 8:56 I started my last lap which takes a little over a minute. After I had made the final turn, just a few strokes before I ran into her, I noticed a woman who had come under the floating lane barriers and was standing right in the middle of my lane. These lanes are big enough for two people to do laps, so she could easily have stood at the side of the lane to let me pass. But because she was in the middle, there was barely enough room to squeeze by her, and as I did, she hit me with her arm.

Can you imagine what my storyteller was doing? It was affronted. Anger came roaring through me, accompanied with the feeling of being right and making her wrong! The stories in my head were saying: “The class starts at 9:00! This is my lane until 9:00. How dare she!” As I got into the shower, awareness kicked in and saw what the storyteller was doing. [...] I could see that this is how wars are started, and I didn’t want to allow that level of unconsciousness to take me over! I could also recognize that many times in my life I had played the role of the woman in my lane and felt great compassion for that part of me. And finally my heart opened to the woman. I don’t know what caused her to act as she did, but I didn’t have to put her out of my heart!

There are 3 reason why I wanted to share this with you:

First: We have this strange idea that peace will come when we get rid of the parts we don’t like and hold onto the ones we do! That only brings continual struggle inside. Instead, awakening is about getting to know all the various parts of our storyteller. The more you can see its fears, judgments and despairs, the more you don’t take it personally. And when something very deep has been triggered, its visit will become much shorter, and rather than you getting caught in more struggle, it will wake up the wondrous healing of your own heart (both for yourself and for others!).

Second: In this world that is so aligned with the good/bad, right/wrong view of the world that is at the heart of each of our storytellers, there is nothing inside of you to be ashamed of! We all have these parts. We are just very good at pretending that we don’t – both to ourselves and to others! And these parts deserve kindness just like you do when you have had a difficult day.

Third: The core flavor of my childhood was invasion, and so my storyteller was built with a huge amount of fear about being overtaken by life. I have, over the years, brought my attention to this part to the extent that it is very quiet most of the time. But there evidently was still some vestige of this old fear, so life put me in a situation to bring it up – not to disturb me, or punish me – but so I could see it more clearly without identifying with it and bring it into the healing of my heart.

So the next time you are caught in reaction, become curious about what your storyteller is doing. Life is giving you these situations so you can see more clearly and thus unhook more cleanly from the storyteller’s world of judgment and fear.

In the early 1970′s, a powerful awakening set Mary O'Malley on the path to changing her whole relationship with her compulsions, freeing her from a lifelong struggle and opening her to the joy and the wonder of being fully awake to Life. Since then, she has dedicated her life to helping others heal themselves by seeing what truly blocks them from life’s joy. This passage was excerpted from Mary's blog.

Seed questions for reflection: How do you relate to the notion that there is nothing inside of you to be ashamed of? Can you share a personal experience of a time when you became aware of what your storyteller was doing? What helps you avoid identifying yourself with your stories?

Every week, we send out a digest with a reading and inspiring stories to our global community of 93,145 people. Subscribe below.