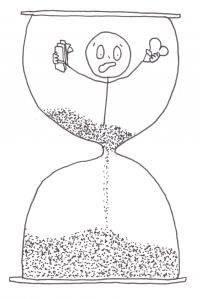 Benjamin Franklin once said: time is money.  He meant this only as a gentle reminder not to "sit idle" for half the day. He might be dismayed if he could see how literally, and self-destructively, we take his metaphor today. Our society is obsessed as never before with making every single minute count. People even apply the language of banking: We speak of “having” and “saving” and “investing” and “wasting” it.

But the quest to spend time the way we do money is doomed to failure, because the time we experience bears little relation to time as read on a clock. The brain creates its own time, and it is this inner time, not clock time, that guides our actions. In the space of an hour, we can accomplish a great deal -- or very little.

Inner time is linked to activity. When we do nothing, and nothing happens around us, we’re unable to track time. In 1962, Michel Siffre, a French geologist, confined himself in a dark cave and discovered that he lost his sense of time. Emerging after what he had calculated were 45 days, he was startled to find that a full 61 days had elapsed.

To measure time, the brain uses circuits that are designed to monitor physical movement. Neuroscientists have observed this phenomenon using computer-assisted functional magnetic resonance imaging tomography. When subjects are asked to indicate the time it takes to view a series of pictures, heightened activity is measured in the centers that control muscular movement, primarily the cerebellum, the basal ganglia and the supplementary motor area. That explains why inner time can run faster or slower depending upon how we move our bodies — as any Tai Chi master knows.

The brain’s inclination to distort time is one reason we so often feel we have too little of it. One in three Americans feels rushed all the time, according to one survey. Even the cleverest use of time-management techniques is powerless to augment the sum of minutes in our life (some 52 million, optimistically assuming a life expectancy of 100 years), so we squeeze as much as we can into each one.

Believing time is money to lose, we perceive our shortage of time as stressful. Thus, our fight-or-flight instinct is engaged, and the regions of the brain we use to calmly and sensibly plan our time get switched off. We become fidgety, erratic and rash.

Tasks take longer. We make mistakes — which take still more time to iron out. Who among us has not been locked out of an apartment or lost a wallet when in a great hurry? The perceived lack of time becomes real: We are not stressed because we have no time, but rather, we have no time because we are stressed.

Seed questions for reflection: How do you relate to the notion that we have no time because we are stressed? What does creating a belief "I have time" do for you? Can you share a personal experience of a time when you were able to see the correlation between inner time and external activity?

Every week, we send out a digest with a reading and inspiring stories to our global community of 93,091 people. Subscribe below.