A Question of Story 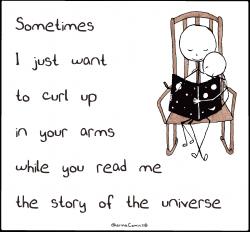 For peoples, generally, their story of the Universe and the human role within the universe is their primary source of intelligibility and value. Only through this story of how the Universe came to be in the beginning and how it came to be as it is does a person come to appreciate the meaning of life or to derive the psychic energy needed to deal effectively with those crisis moments that occur in the life of the individual and in the life of the society. Such a story communicates the most sacred of mysteries …. and not only interprets the past, it also guides and inspires our shaping of the future.

It’s all a question of story. We are in trouble just now because we are in between stories. The Old Story—the account of how the world came to be and how we fit into it—sustained us for a long time. It shaped our emotional attitudes, provided us with life purpose, energized action, consecrated suffering, integrated knowledge, guided education. We awoke in the morning and knew where we were. We could answer the questions of our children. We could identify crime, punish transgressors. Everything was taken care of because the story was there. But now it is no longer functioning properly, and we have not yet learned the New Story.

Thomas Berry was a Catholic priest of the Passionist order, cultural historian, cosmologist and “Earth scholar”. Among advocates of deep ecology and "ecospirituality", he is famous for proposing that a deep understanding of the history and functioning of the evolving universe is a necessary inspiration and guide for our own effective functioning as individuals and as a species.

Every week, we send out a digest with a reading and inspiring stories to our global community of 93,095 people. Subscribe below.