Money is not Wealth 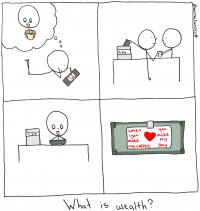 Money is a way of measuring wealth but is not wealth in itself. A chest of gold coins or a fat wallet of bills is of no use whatsoever to a wrecked sailor alone on a raft. He needs real wealth, in the form of a fishing rod, a compass, an outboard motor with gas, and a female companion. But this ingrained and archaic confusion of money with wealth is now the main reason we are not going ahead full tilt with the development of our technological genius for the production of more than adequate food, clothing, housing, and utilities for every person on earth.

It is not going to be at all easy to explain this to the world at large, because mankind has existed for perhaps one million years with relative material scarcity, and it is now roughly a mere one hundred years since the beginning of the industrial revolution. As it was once very difficult to persuade people that the earth is round and that it is in orbit around the sun, or to make it clear that the universe exists in a curved space-time continuum, it may be just as hard to get it through to “common sense” that the virtues of making and saving money are obsolete.

It is an oversimplification to say that this is the result of business valuing profit rather than product, for no one should be expected to do business without the incentive of profit. The actual trouble is that profit is identified entirely with money, as distinct from the real profit of living with dignity and elegance in beautiful surroundings.

To try to correct this irresponsibility by passing laws would be wide of the point, for most of the law has as little relation to life as money to wealth. On the contrary, problems of this kind are aggravated rather than solved by the paperwork of politics and law. What is necessary is at once simpler and more difficult: only that financiers, bankers, and stockholders must turn themselves into real people and ask themselves exactly what they want out of life — in the realization that this strictly practical and hard–nosed question might lead to far more delightful styles of living than those they now pursue. Quite simply and literally, they must come to their senses — for their own personal profit and pleasure.

Alan Watts was profoundly influenced by Vedanta and Buddhism, and by Taoist thought. In 1957 he published his bestselling Way of Zen, and in 1958 returned to Europe where he met with CG Jung. By the late sixties he had become a counter culture celebrity, and traveled widely to speak at universities and growth centers across the US and Europe. By the early seventies Alan Watts had become a leading interpreter of Eastern thought for the West. This passage was excerpted from 'Does it Matter? Man's Relation to Materiality.'

Seed questions for reflection: What does wealth mean to you? Can you share a personal experience of a time when you understood the "real profit of living with dignity and elegance in beautiful surroundings"? What do you want out of your life?