"It is true that we are called to create a better world. But we are first of all called to a more immediate and exalted task: that of creating our own lives." ‑‑Thomas Merton

We host at two locations near Detroit.  Email us to join. --Trevor

A Reflection From the Host ... 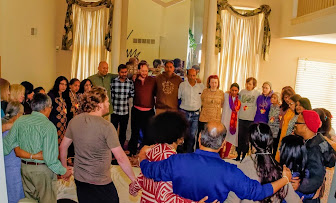 Many years ago, I met Madhu -- and it changed so many things in my life, because he selflessly introduced me to so many people, ideas, and practices. One of them was the Awakin Circle, that he and his lovely wife have been hosting for many years now. Few weeks back, when I was in India, I had the opportunity to join their Awakin Circle, with so many noble souls! And it reminded me of the Awakin Circles in our home, in Michigan.

I'm writing this to tell you all that Wednesdays have changed my ... OUR family! Initially, we just started with couple of us (lovingly supported by Trevor and Sateen!) but now more than 10-15 people come regularly (and more than a 100 people in our email group!). So glad to be connecting with these warm people who are thinking on the same wavelength! As we have opened the doors of our home, it is getting filled with love and peace from all the people who walk into our home!

The other interesting thing that happened is that when I was out of the country for 5 weeks, I was a bit worried because Bharat Uncle (my husband) isn't very good in the kitchen! But this time, my meditation family took over the entire arrangement of food! They all potlucked or took turns to bring in food and sit together -- because they didn't want to break the Wednesday community! Coming together means so much to them, and I was so touched to see them spontaneously come together as a family and continue to stay connected. Not only that, Gary (a yoga teacher and one of the kindest people I have ever met), took charge of emailing everyone, following up and anchoring the circle.

Just want to say thank you to SO many of you. By your very example, you have changed the direction of my life and touched so many others.

Intentionally located in East Oakland -- to, on the one hand, overcome institutionalized violence and on the other hand, be showered by the multicultural love and wisdom from neighbors-- this small community strives for integral nonviolence and supports activities that foster fearlessness, courage, autonomy, unconditional love and compassion for all beings.

Every Friday for the last 6 years, the anchors of Awakin Oakland -- whose main door is unlocked 24hrs, all days of the week -- host "Wednesdays on Fridays", an open-house meditation night that was inspired by a family in Santa Clara who has been doing this for close to 20 years [2017]. Also, for the last three years, these Awakin circles in Oakland have been hosted every other week in Spanish as a way to invite sharings closer to the heart from the large Spanish speaking migrant community in this neighborhood. The format goes like this ...