Pilgrims for Peace: Mony and Alberto

For both of them, it began at the end.

Married, with a stable marketing career at Microsoft in Canada, Mony was content in many ways. Then, after her husband announced he was leaving, she found herself at a dead end.

In Spain, Alberto was an artist in the insurance industry. Unable to find meaning in his work, he grew increasingly discontent. “I didn’t know how, but I knew that I needed to do something. I needed to change my life, because if I continued to live in that way, I preferred not to live.”

With contagious enthusiasm and zest for life, Mony and Alberto joined us last Saturday to share beautiful reflections from their 2-year turned lifelong pilgrimage.

The Path to the Camino

“Really, the change came before the Camino,” Alberto said. He went on to explain, “The change came with a realization, when I surrendered my fears about what to do with my life and allowed myself to risk.” 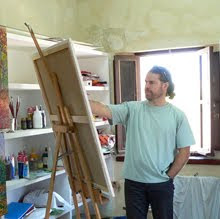 Though he was an artist at heart, Alberto had been taught all his life that art was no way to make a living—it was a hobby, not a real job. “So I never really tried to work in a way that really inspired me,” he explained.

But when he surrendered his fears—of his partner leaving him, his parents not understanding, and society pointing him out as crazy—“that was when a door opened that I didn’t expect. And a new vision of life came to me. A vision of life where I discovered that I was not a victim of the world, but I could change the world. And I could do with my life something positive.”

At the same time, in Canada, Mony had arrived at the same conclusion.

Both independently found themselves on the Camino de Santiago, a 900 km pilgrimage in Northern Spain. At the end of the Camino, Mony and Alberto met. Along the Atlantic Ocean, in a town called Finisterre—“the end of the world” in ancient times—Mony told Alberto that she would walk from Rome to Jerusalem for peace.

The idea had emerged one evening, along the Camino, when Mony plopped down next to a group of pilgrims. One of them mentioned that the Camino de Santiago is known as “The Way of Strength”. It’s a place where you face your fears, where you look at your demons and try to heal them. Then there’s another pilgrimage route to Rome that is called, “The Way of the Heart”. A path of unconditional love. And finally, there’s a third pilgrimage that goes to Jerusalem, called “The Way of the Soul”.

“As soon as I heard that Jerusalem was “The Way of the Soul” something in me just sparked.” With no clear plan or outline of what it would look like, Mony decided to walk from Rome to Jerusalem: “To start from the Heart and walk to find the Soul.”

On top of that, walking to Jerusalem wove together pieces of her past. As a Lebanese, Mony grew up surrounded by living room conversations about the conflict and notions of justice. “Peace attracted me, and I thought, Well what better place to carry peace to than Jerusalem!”

After finishing the Camino, Mony headed back to Canada, where she faced some doubts. “Everything is very possible on the Camino. All the grandest plans seem wonderful on the Camino. Until you walk off. And then you get back in the ‘real world’. And it’s like, ‘What?! You’re a woman, you want to walk alone on the side of the road?’ The idea didn’t seem as magical after that. Until 9/11.”

When 9/11 hit one month later, the ideas of peace and living life to the fullest were never more relevant. So without thinking any further, she headed to Rome. Along the way, she serendipitously ran into Alberto again. Feeling resonant with her purpose this time, he joined, and together, they would cross 13 countries in 13 months on a grueling, humbling, and mystical 5,000 km Walk for Peace. Throughout the walk, one of Mony’s greatest lessons was that she must let go of her expectations before she could really find peace. Over time, she discovered, “If someone turns you away, that doesn’t mean they’re rejecting you. That just means you’re meant to be somewhere else.”
This was tested one evening in Italy, when Mony and Alberto were turned away from shelter three different times. That day, they had been told by locals in one town to wait for a priest. So they waited, and around 5 o’clock the priest arrived and said they didn’t have anything for them. Then they walked to the next town, about 11 km away, and arrived on the steps of another church, where another priest answered and said “I’m not a hotel.”

Devastated, cold, and tired, it was 10pm on New Year’s Eve. Everything was closed. Opening up to the resources around them, they went to a local prison and asked if they could sleep in a cell. Even that wasn’t a possibility. Eventually, they found shelter in an abandoned building, and “it was just enough.” There was hay, a wooden ramp that they could sleep on instead of the cold ground, and they used their tent as a blanket cover.

Alberto added, “It was a clean place…and that was the only night no one received us.”

In the six months it took to walk from Rome to Greece, every other night the kindness of strangers welcomed them in somewhere. Even that evening, “We had shelter!” they both exclaimed with a simple joy at having something so basic. “In many ways we saw it as a gift…it was better than many other places we had stayed!”

They walked with the intention that people were good, and like the gift of shelter from an abandoned building, they saw gifts everywhere.

When asked if they ever felt threatened, both immediately replied, “No.”

“In so many situations, people would just come up to us and just hug us. And they would cry, without saying a word!”

When they reached Jerusalem, it wasn’t over.

“I was walking to Jerusalem expecting to find all my answers and arriving there with all this clarity and energy, and contributing that energy towards peace,” Mony reflected. “But really, in the end, it’s not about the destination. It is about the journey…And because of that, the journey never ends.”

Alberto agreed, “Life is a journey, life is a pilgrimage.” 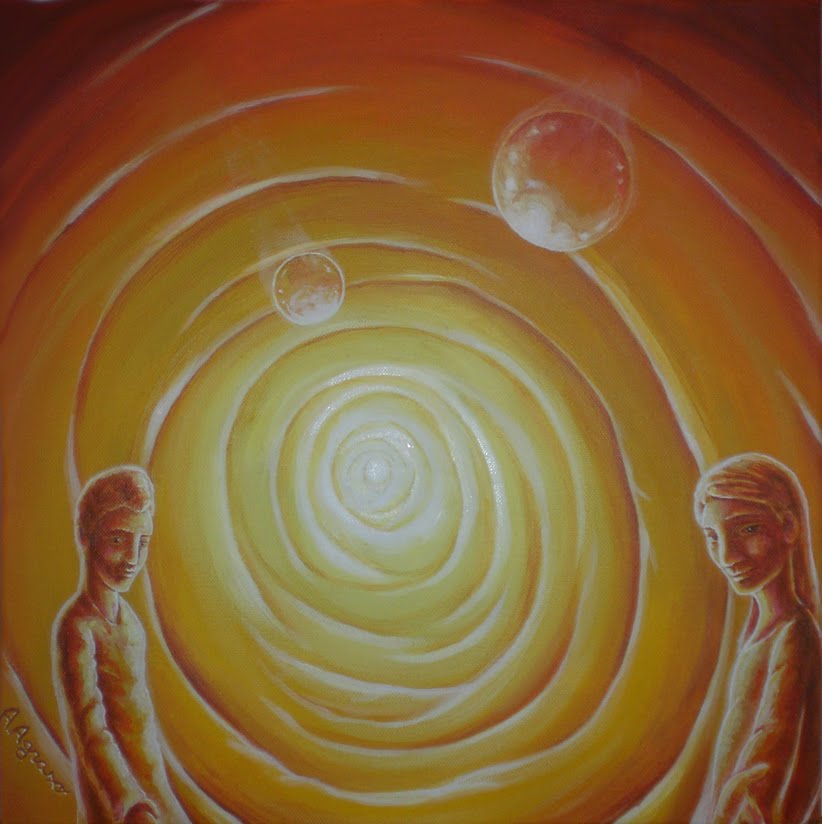 Today, the two are constantly applying the principles of their pilgrimage into their day-to-day lives. This manifests in all forms, including an 8-year-old daughter who teaches them about love. :)

Q: How has your relationship to money changed after the pilgrimage? Especially when you have a daughter, thinking about her future?

Mony: I grew up with little money, with the belief that you had to work hard and sacrifice to make money. I followed that for a long time. But I’ve found that whenever I’ve followed my heart, and taken a leap of faith to do something that I really felt drawn to, money has just come. …On this pilgrimage, the issue of money for me was learning how to accept, how to receive, money. Because money appears in many ways. It’s not just somebody giving you some bills. It’s an energy. And so people want to give in many ways. Whether it’s through physical money, whether it’s to invite you to a meal, whether it’s offering you clothing.

So the lesson I had to learn on my pilgrimage was how to receive graciously. Because I was someone who was accustomed to give—I had no problem giving to other people, of my time, myself, my money. But really, I think part of the journey is learning how to receive, and allow others the pleasure of giving.

Alberto: For me, one of the reasons I quit my job at the insurance company was because I didn’t believe in security (in the sense that we as a society do today). I think the problem is when we put money as a goal—when we see it as something we can’t live without. So when I walked without money, it was to show to myself that I really didn’t need it. But once I showed myself that money wasn’t necessary, I also didn’t want to demonize it. Money is a tool. It can be a good tool. As long as you don’t make it divine.

Q: How can we be the peace we wish to see in the world?

Mony: I think the moments in which you find yourself in states of peace, in moments of joy—whether that joy is in taking a walk, doing something kind, listening to music, dancing—anything that lifts the heart and inspires you in a way is allowing you to be the peace. …I think when you are following your passions, when you are living from the heart, then you are being the peace. You are emitting an energy that goes out and attracts and creates more of that.

Alberto: When you have the intention and are open to learn more and grow, and you are open to change, you are being a channel of peace.

Q: How have you changed since your walk? How does that affect your interactions with the people that surround you?

Mony: After our walk, we went back to Canada. And the more that we stayed there, I felt like a fish out of water… the world that I came back to—my friends, my family who all deeply loved me—didn’t understand me…The first month in Canada, I felt like nobody wanted to talk to me. But I came to appreciate that they were just not ready to hear it. Especially my family, they were waiting for me to get back to a normal life. “Okay, she’s gone and done her walk for peace. That’s all great, now she’s ready to settle down, get a job, have a family and get back into the box.”

…There are so many pressures to conform, to follow what others believe is the best path with you. They really don’t know you as well as you know yourself. The real work for me—especially being back “in the real world”—is to remain loyal to what you believe, to who you are. Being authentic is one of the greatest gifts that you can offer the world, wherever you are.

Alberto: Having walked through all these different countries, I think the world is a big family. I think we are all similar to each other. The country can change, our way of thinking can change, our clothes and what we eat can change. But I think all of us—brothers and sisters in this beautiful world—we are all walking in the same way. The way of self-discovery, of discovering what is life, why we are here, who we are really. In any country that we’ve been, we’ve seen that. We talked with people of all different cultures and perspectives, and each time I would think, “This is my brother. This guy is like me.” We are all walking the same path. We are all walking in the same direction, whatever it is.

More about Alberto and Mony, including their book and Alberto's art, can be found on their website.