Imagine being drawn to the invisible, something that cannot be seen with the finest of microscopes, but something that can be felt so deeply from the core of your being. Every step forward might feel like the scariest next step in your life, yet at the same time, the lens from which you view the world is dramatically shifting. On our Global Awakin Call, many of us were moved and some of us were even strengthened through our conversation with Siddharth Sthalekar, an individual that truly lives by walking the walk. He left behind his lucrative career in the stock markets, not because he had found his life’s true calling, but because it became crystal clear that his values had changed. What were his new values?  He had no idea! But he knew he had to explore in order to discover…so with the support of his most noble friend and partner, Lahar, they threw everything up in the air and changed their course. “When I decided to leave my job as a stock market analyst, I didn’t know what I aligned with anymore, what I represented. I didn’t know why I was alive. That fear was far scarier for me than losing my income and sense of security. But every month after I left work, there were so many things emerging for me, it was as if my brain was being rewired every month.”

Initially, Siddharth did have somewhat of a plan. With his prestigious IIM degree and qualifications, he pondered the idea of starting a nonprofit, being a social entrepreneur, or creating a mini-revolution in some other way. But what he found was that as soon as he started walking, all those plans started disappearing. And what emerged in its place was a deep response from within to put his ego aside and find himself through serving others.

“The best way to find ourselves is to lose ourselves in the service of others.” Mahatma Gandhi

With pure faith in that process, Siddharth and Lahar searched for a place where they could deepen their commitment to service. Having rejected Mahatma Gandhi for the first 29 years of his life, Siddharth felt something shift after reading his autobiography, “The Story of My Experiments with Truth”, and eventually ended up at the Gandhi Ashram, in Ahmedabad, India. They only went for a weekend and ended up never leaving. That was almost three and a half years ago.

“Over the last few years, our intention has constantly been to ‘not look for answers’ since that is rooted in a right, or wrong. Instead, we decided to approach our time as an ‘Experiment in Generosity and Faith’. “

For the first time in a long time, at the Gandhi Ashram, Siddharth was asked to switch off his brain for about three months and reconnect with his heart. True to a famous quote attributed to Mahatma Gandhi, “Be the change you wish to see in the world," Siddharth and Lahar had discovered a space where everyone they met was looking at service as a means of inner transformation, through the alignment of their head, their heart, and their hands.

The heart piece is a big question mark for many people. In the abstract, it sounds warm and fuzzy, beautiful, and even mystical to live through your heart. But in reality, what does it actually mean to focus on the heart as it relates to doing work in the world?

“That sacred part of each person is where you will find the values that you stand for and by values, I mean what you could not see your life without. I think that if the intellect is in service to that sacred part of us, our decisions our aligned with our hearts and with nature. Our decisions come from a space of offering and so they are far less damaging and far more regenerative for ourselves, our community, and our world.”

One of the first heart centered projects that Siddharth and Lahar joined through the Moved by Love initiative at the Gandhi Ashram, was something called Seva Café. A volunteer run restaurant committed to the values of trust, abundance, and community. In that spirit, Seva Café offers all of its meals as a gift for you to simply pay forward if you wish! Now imagine immersing yourself in that kind of space after spending the last few years in a world defined by monetary value.

After the economic meltdown in 2008, Siddharth had become pretty much convinced that either the world would end in the next five or ten years or there was going to be a major revolution. But one night after spending the evening volunteering with school children at Seva Café, someone asked him, “What do you think is going to happen to the world?” Siddharth had been so moved by these school children that were driven by the spirit of offering and service, that he found himself answering,

As he spoke this, Siddharth could almost visualize these words floating out of his mouth and his mind was almost protesting, “What are you saying!? You sound like a hippy!” But that night he went home and realized that the world couldn’t have changed that much in the last three years.

“What I realized was that I had changed and the lens with which I was viewing the world had radically shifted. That night I made a commitment to myself to constantly work to change my lens in this way.” 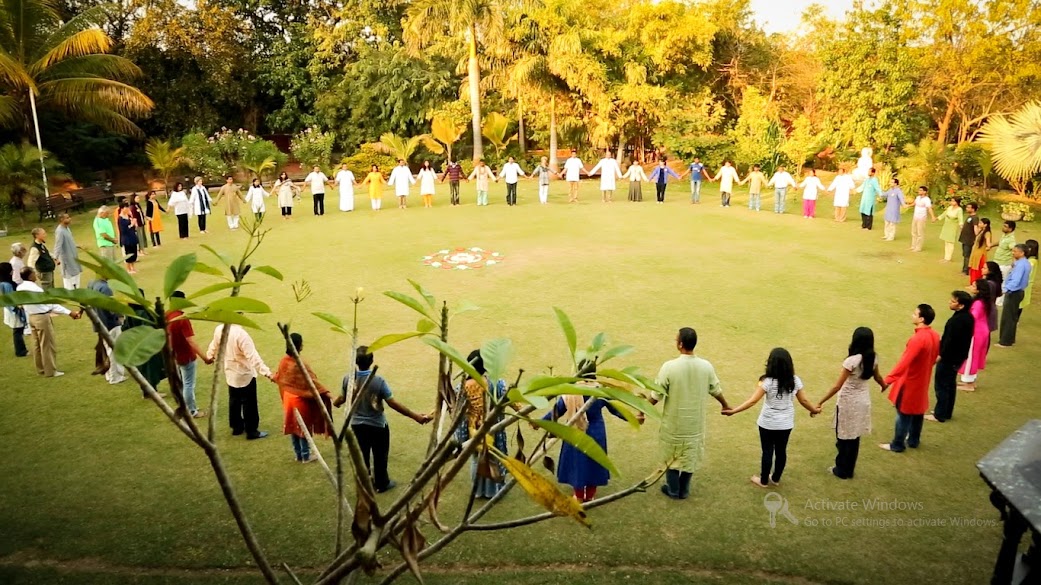 That kind of commitment is not easy, it requires us to constantly reevaluate our practices and our values and push the boundaries of what we know. But when you’re on a certain path, sooner or later, you will most likely encounter others that are walking the same road, yet challenge you to work harder. Some may call these individuals that you encounter along the way noble friends.

“I’ve made a very conscious effort to plant myself in circles that foster inner transformation. These are circles where people are not asking, “What’s in it for me?”, but instead, they’re asking, “How can we contribute more?” This is the kind of sustenance that I’ve survived on for the past three years.”

Along the way, Siddharth has encountered numerous noble friends, but one that has impacted him the most was Raghu Makwana. Although Raghu developed polio in his legs when he was only six months old, he had committed his life to serving others. He passed away a few weeks ago and that has made Siddharth think about where he his in his service journey. Very often Siddharth would experience extreme moments of scarcity and go through this phase where he would wake up in the morning and hear about a friend that bought a BMW or joined a multi-national bank and he would think to himself, “Siddharth, what have you done? You’ve thrown it all away for what?” Every time that happened, he would go over to someone like Raghu.

"It’s so beautiful because Raghu has almost no family support, his bank balance would last him another 10 or 15 days, and he doesn’t even have feet.

Yet Raghu's question to me would always be, “Siddharth, how can we offer more? How can we serve more people? ,” and that was just so radically challenging for my mental construct and it made me question what true scarcity really is.

The World Bank would easily classify Raghu as below the poverty line but I think I learned a few lessons in abundance from him and other people like him.”

Experiencing so much goodness in others through Seva Café and people like Raghu, Siddharth became aware that goodness exists in all of us. What’s important is to think about what doors we’re knocking on to access this goodness within all. He realized that spaces that are rooted in these values allowed him to open these doors to people’s hearts, they allowed him to tap into these values of goodness. So the question then became, “How can we create more and more spaces that tap into people’s hearts in this way?”

Through the larger umbrella initiative, Moved by Love, Siddharth and many others knew that it wasn’t going to be projects that would tap into hearts, but it was just holding space in a non-agenda, non-motive driven way. For more than a year now, Moved by Love has been holding this kind of space through monthly three-day retreats. The only guiding principles that the organizers move by are abundance, trust, and community; the only design framework that they creatively follow is an alignment of head, heart, and hands.

In this agenda-less framework, a space of love emerges where individuals from all walks of life are moved to a spirit of offering by the end of the weekend. New ideas and projects have emerged that are entirely rooted in values of compassion and generosity. Recently, Moved by Love hosted a start-up weekend for entrepreneurs and Siddharth shared that while radically different enterprise ideas were emerging, at no point in the weekend did anyone ask, “What am I getting out of this?”

“The question we should be asking is not so much about scalability or even sustainability, but instead regeneration. When we flip that framework, we realize that impact is happening but not in linear ways that we can draw direct lines to or even take credit for.  Thinking in terms of scalability or sustainability can sometimes force us to chain in and hold back what the true impact could really be, but when we let go and look at impact in terms of regeneration, we're asking ourselves to take a huge leap of faith. Suddenly, you’re not working to change the external world, but you’re serving from a place of offering because in that space of offering, you’re changing from within.” 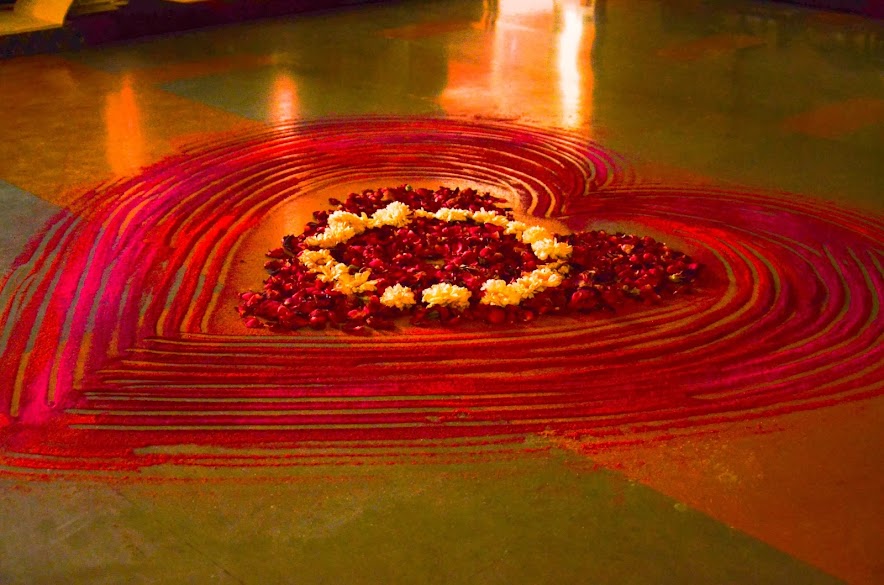 “It’s an extremely dark space because there’s no guidelines, but that’s the beauty in it, that’s the joy. I think, just in these past three years, through initiatives like Moved by Love, I’m starting to see how this intention that we hold in our hearts is creating more material impact than a Siddharth that’s sitting in front of an Excel spreadsheet and creating impact in very linear ways.”