Jerry Wennstrom: In the Hands of Alchemy... can ignore the deeper calling, and just dig in and live our lives in some ways miserably happy on the surface. Or we can give ourselves to that radical shift, and let it take us where it needs to.”

It was pretty humbling to listen to these pearls of insight from Jerry Wennstrom’s journey last Saturday. As someone who has walked his talk—who has given up everything during the prime of his art career to delve inward and outward on a more meaningful journey, last week’s Forest Call was really a “symphony of conversation” as one caller described it. :)

When he was 29, he destroyed all his art.

Up until then, he painted constantly. He was at the height of his career. From his New York City loft, his creative expressions hit home for many people. A film had even been made about all his work.

But something didn’t feel quite right.

“I had to ultimately find out who was behind all that, and the only way to do it was to let go of the identity.”

For the first time in 15 years, Jerry Wennstrom put down the paintbrush. After a month in retreat where he fasted and read A Course in Miracles, he became clear:


I could either keep doing what I was doing as an artist, but it felt like a fear-based choice. Or, I could give myself to this exciting, abstract allurement, that I felt like would give me everything, but it promised nothing. Because it would mean becoming nothing, and allowing it to enter…

It was not an act of destruction. It was a leap towards—a kind of quantum leap—into something that I didn’t yet know what it was.

From that point and 10 years afterwards, Jerry lived on nothing but the moment. Having given up his money, he never asked for anything. With no art or identity, no structure, plan, or name to fit into, he found himself completely present with whatever happened in the moment. Unconditionally.

“Which was terrifying at times,” he recalled.

When he had food, he ate. When he didn’t, he fasted.

Once, during a period of several days, he was fasting and not sleeping very much (“Because when you fast a lot, you tend not to sleep very much. There’s a different kind of energy that takes over.”) He was living in Harlem, and out on a late-night/early-morning walk. Passing by the YMCA, there was a gang sitting on the stoop.

I walked by, and one of the men came over and asked if I had a cigarette. I said, “No,” and continued walking.

About half a block later, he called me back.

It was one of those moments where Jerry had to pay very close attention to his internal rhythms.


“Is it fear?” he asked himself. “Or is it being fully present with what is and trusting in the moment, which is absolutely what I had given my life to, by giving everything up.”

So on the strength of that, Jerry turned and walked back over to the young man, who had a cigarette between his teeth.

After another block or so, the young man called Jerry back again. Again, it was a moment that called his fears and purpose into question. No one else was around. Jerry walked back over, and all the men on the stoop stood up. There were some women sitting on the stoop.


“Well, what do you have?” the young man asked, with his group surrounding Jerry.

All he had on him were some boxes of raisins. In those days, there was a “Superman” brand of raisins. Jerry would carry boxes of them around and give raisins out to kids on the street, who came to know him and would come running when they saw him.

He handed the young man a box and put some down on the stoop in front of the women of the group. Then he turned, and continued walking. Raisins pounded the street behind him.

“Who do you think you are, giving me these raisins?”

Facing his interrogator in the midst of late night/early morning hours, Jerry describes, a moment of surrender. Having grown up in a poor neighborhood, he found himself accessing a deep care for this young man who appeared quite angry in front of him. He described:


Coming from that place, it was a place of surrender, just feeling the love for even this—this difficult moment.

And I simply said, “I was just trying to be kind.”

At that point, the women jumped off the stoop and pushed the men out of the way.


“You be on your way now, they don’t mean you no harm,” they told Jerry.

As he walked away, he looked back at the ringleader and saw an expression of pain in his face, as if he had been trying to impress the women and it had backfired.

During that period, it was in those little moments, those chance encounters, where every response was a choice. And in giving away his life—in leaping into a constant state of surrender—he opened up to discover the depth of possibility in both himself and others.

Those little moments pieced together a period of “death” in his life.

“We don’t necessarily learn that much about that metaphorical death in our culture,” he pointed out. “We think it’s all supposed to be positive and love and light, when in fact, any journey worth its salt is going to take us into the depths where we’re no longer in control. And, to the ego, that looks and feels like death.”

For fifteen years, Jerry lived in solitude. He listened and struggled through fears. He grew open to each moment, and each encounter with another human being.


And there lies the inherent loneliness to go your own way, which is the way of your own mystery… there’s no reference point… It’s going to be about being so completely who you are that what ultimately shines in the world is a unique expression. And we love that uniqueness and we’re terrified of it at the same time. We want to look like something recognizable.

Through the slow, steady tone in which he spoke, and the lucid descriptions of his process, it became pretty clear that Jerry is one who had faced a lot of edges in himself and in the world. At one point in the call, several of us were moved by his description of death—of the metaphorical “death of the ego” that has to happen in order for a deeper life expression to emerge.

“You know, not in terms of what we want, but in terms of moving people, touching lives, being of ultimate service. Because we can’t serve others if we have a place that we won’t go.”

Today, Jerry lives with his wife Maryilyn, in house on Widbey Island. After fifteen years of solitude and in celibacy, Jerry made his way out West, where, at the age of 43, he got married, and settled on the rural property with a 40-foot meditation tower that he had built on top of a water cistern as a wedding gift for his wife. He has a studio filled with an entire new body of artwork, and objects (many of which were salvaged or offered as gifts) with endless stories.

On a property as intriguing as his life, many visitors have come through, including nine Tibetan Monks (who crowded into the 8 square foot tower to perform a blessing ceremony), Laura Chester (who featured his tower in her book on sacred spaces) and many young people caught at a point in life where everything is becoming undone.

When Richard, our moderator, 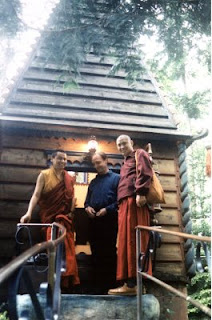 suggested that Jerry might inspire some visitors on this call, Jerry warmly replied, “We have a dormitory, where we have people stay. A very big a part of my life is staying open to what comes. And many people come.”

Listening to Jerry is like listening to the ocean. There’s a calm in his voice, a presence that can penetrate your soul, and a trust in the ebb and flow of people and life. When one caller asked about how he stays balanced in the presence of fear, he answered, simply, “I think it’s that practice of reverence.”

At the end of the hour and a half Forest Call, I felt like ten minutes had passed. I found myself filled with gratitude. What a gift to learn about the trajectory of such a life. What a gift to witness the beautiful possibility that can unfold when we have the courage and honesty to live from an inspired heart. 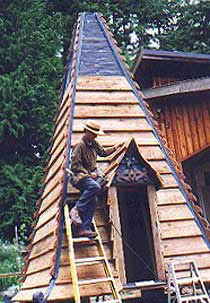 Today, Jerry travels around the world, sharing his stories, teaching, and writing. More of his unfolding story is captured in his book, The Inspired Heart: An Artist's Journey of Transformation and in the Parabola Magazine film, In the Hands of Alchemy.